CONFORMATION
The typical conformation of Criollo cattle reflect the characteristics they evolved to survive and thrive in first the arid environment of Andalusia, then the 500 years they have spent in the New World. They are small, trim cattle, with sufficient bone and strength for easy action and endurance. Very athletic, they can travel long distances without getting winded or stressed. Generally, mature bulls are 1,000-1,250 lbs, and mature cows are 800-1,000 lbs. They are narrow cattle with high withers, and a short, peaked rump. They have a clean dewlap, deep girth, and neat flank. Cows have neat, tight, trouble-free udders with small to moderate teats, and produce rich milk with fat content rivaling that of Jerseys. Bulls have a tight sheath. A high, bushy tail switch and pronounced mane/forelock are notable characteristics. Criollos come in any color. 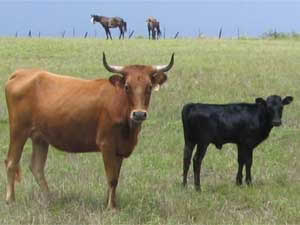 Criollos are a horned breed. The horns are ear-length at one year, and begin curving forward and upward at the tips of the ears. They use their horns effectively, both to clear brush, dig up prickly pear and disable predators.

HUSBANDRY
Criollo cattle readily adapt to various terrains and extreme climates. They are NOT fussy--they can thrive anywhere! Criollo can develop heavy winter coats, if necessary. Muddy swamp, lush pasture, high desert, or the mountains: they thrive in any environment. Needing little human aid or supplementation, Criollos "hustle a living" in even tough environments, such as northern Mexico and the western United States. They'll range farther than any other breed in their foraging efforts, and will eat vegetation other breeds won't touch. Criollo don't need a fertilized, groomed pasture to thrive.

TEMPERAMENT
The Criollo disposition is remarkably gentle. Never to be confused with Mexican fighting bulls, or even Texas Longhorns, they are very tolerant of human contact. Historically raised in small herds in remote areas of Mexico, these cattle were often gathered on foot. Criollos are easy to gather in the pasture (depending on the size of the pasture, just honk a horn or call them!); they do not have a tendency to wander. In the working pens, they are quiet and tractable in the chute, and never spook or sull. They are comfortable with humans, and need minimal facilities to be worked.

Criollo cows can be very endearing; ever hopeful for handouts, they teach their calves valuable skills such as eating from your hand and tagging around after you like a dog. Although watchful, dedicated mothers, they are not aggressive about their calves with humans. Indeed, many seem eager to "show off" the new arrival!

Newborn Criollo calves are 25-45 lbs, approximately the size of a long-legged Cocker Spaniel dog. Fleet of foot and very wily, they are actively grazing and browsing in their first week of life. Criollo cows and calves have a keen awareness of each other's location, and tend to stay paired up even on long drives in very rugged terrain. Average weaning weights are from 350-450 lbs.

A fascinating part of the Criollo mind is their coordinated management of predators. They don't tolerate predators or defend against them; instead, Criollo actively run predators off. 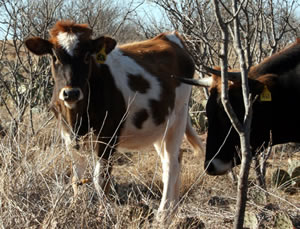 The mother cows form a skirmish line in front of the calves; yearlings range out in front, with the herd bull leading the attack. Many a wily coyote, used to dealing with the polled European breeds and their attendant lack of athletic skills, has been gored by a swift, agile Criollo.

FERTILITY
Any rancher would love to have the production results with the reliable ease of Criollos. Conception rates of Criollo herds normally range upward from 95%, with comparable live birth and weaning rates. These numbers include first-calf heifers: Criollos normally have their first calf at 20-24 months of age, and continue to produce calves into their twenties. Many a Criollo cow has weaned 20 or more calves!

Criollo bulls are equally fertile. They normally reach puberty before 12 months of age, and can cover 25-50 cows their first breeding season. Mature bulls routinely cover 75 cows per season. Criollo bulls are excellent for breeding to first calf heifers of other beef breeds, to insure calving ease, a healthy & stress-free dam, and a vigorous, marketable calf.

BEEF & MILK
Criollo cows produce a large amount of rich, high-fat milk for their comparatively small size. Families in Mexico and the southwestern United States have kept Criollo as dairy animals for almost 500 years; their gentle nature and predictable fertility insure a long, productive career as a dairy animal.

Criollo beef is the crown jewel of the breed's many desirable characteristics. Criollo, genetically, are naturally tender and lean. DNA testing reveals that, of 6 available DNA markers for tenderness, Criollos usually have at least 4. DNA markers for marbling indicate that they are genetically programmed to be lean. Interestingly, since their meat is predominantly red muscle fibers, rather than white muscle fibers (as is found in the European beef breeds), Criollos will marble in a shorter feeding period than other beef animals. The third major genetic trait identified with DNA markers is the Feed Efficiency Ratio; Criollos typically have 6 or more of the 8 markers available. Such a genetically guaranteed efficiency with forage explains how Criollos can thrive in environments where other cattle starve.