History and Origin of Criollo Cattle

Criollo cattle were first brought to the New World with Christopher Columbus, with his second expedition in 1493. Hardy and durable, these cattle came from the desert country of Andalusia, in southern Spain. Having already evolved in a hot, dry climate with scarce feed and less water, these cattle were ideally suited to survive the rigors of an ocean crossing and adapt rapidly to a new environment. The conquistadores brought Criollo cattle with them, for draft, beef and milk, to all areas of the western hemisphere over the next few years. 5,000 head of Criollo cattle were brought with Onate's expedition through northern Mexico and the New Mexico area of the United States in 1593.

Criollos spread rapidly across the arid and semi-arid regions of the western United States and northern Mexico. They flourished in a hostile environment, learning to utilize all available vegetation and stretch every ounce of drinking water. In villages all over Mexico and the southwest United States, each household kept a criollo cow for milk, and meat from her calves. Each village or two shared a Criollo bull, whose job was to cover all the cows in his area. A docile temperament was critical, as the Criollos were taken out to graze each day by the village boys, on foot.

Over the next 400 years, the unique traits that define the Criollo breed were solidified:

With the introduction of European beef breeds in the late 1800's, pure descendants of the original Spanish cattle almost disappeared, but some managed to survive with little human care or intervention in remote areas of Mexico, Central 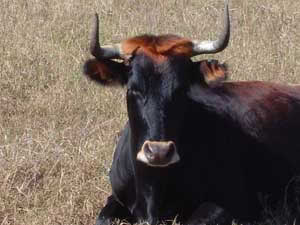 and South America, and some areas of the southern U.S.

In the 20th Century, the popularity of rodeo events such as team roping and bulldogging sparked a brisk demand for Criollo cattle. With their small size, agile and athletic frame, stamina, heavy horns and gentle disposition, they were an ideal choice for these events, as well as for cutting and team penning. They are still in high demand as sport cattle today. This variety is referred to as "corriente."

Today, there is a world-wide growing interest in the pure strains of these hardy, native cattle. Untainted with, and therefore not weakened by, the genetic manipulations of the animal husbandry industry, Criollo cattle provide the solution to many of the problems the modern beef industry is experiencing:

The Criollo is the ideal solution to these urgent concerns.