Criollo Cattle Are Good For The Land

Restoring America's rangelands to their former productivity has been a top priority of environmental specialists ever since Teddy Roosevelt's presidency. Research in the past few yearshas focused intensively on Criollo cattle, trying to understand how these cattle use their environment so effectively to gain and thrive, yet leave little mark of their presence. 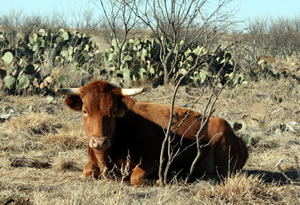 Research efforts have revealed many interesting differences between Criollos and other beef breeds. First of all, Criollo cattle range significantly farther afield to find food than their European counterparts. With their small, athletic frames, they don't have any difficulty navigating steep, rough ground, so can reach even the most inaccessible areas. Criollo cattle naturally self-rotate through a pasture, utilizing every square foot of acreage, rather than concentrating on any one area. They will readily eat vegetation other breeds wouldn't touch, such as prickly pear cactus, mesquite, thistles, and numerous other weeds. Interestingly, Criollos graze fewer hours per day and remain active in hotter temperatures than their European counterparts.

The most interesting fact gleaned from the research is the Criollo's efficiency. They require only 1/2 to 3/4 the amount of feed and pasture necessary to maintain ordinary beef cattle.

A study done by the USDA concluded the following:

"The breeds we examined differed in their use of the landscapes we studied. Criollo cows tended to be generalists spending more time exploring the landscape, traveling longer distances, and spending less time near water. In addition to other possible adaptations, the smaller body size of criollo cows lowers forage demand, which may partially explain the shorter time devoted to grazing when compared to the larger British breeds. Criollo cattle demonstrated behavior characteristics that may improve profitability while having more favorable environmental impacts than British breeds. It is noteworthy that our study was conducted during a year of average to above average rainfall and forage production following an extended drought. While differences were found during our study we believe the magnitude of these differences may be greater during periods of drought, a condition that typifies these sites. Based on this work we believe there maybe benefits to using criollo cattle that are worth exploring further."

Click here to see the published results of this study.