Criollo Beef is Profitable for the Rancher

While fuel and supplemental feed were still cheap, ranching with typical European beef breeds was a business model that worked very well. However, many factors are contributing the current tough economic times the modern rancher is enduring. Ranchers are having a tough time making a profit in the last few years. Fuel prices have risen. Supplemental feed costs have risen even more; for example, the demand for corn has intensified dramatically since it has become an alternative fuel feedstock. In addition, the process of desertification has been under way in the western United States and northern Mexico for more than a century, creating more unusable shrublands wherever beneficial grasslands are lost. Throw in a drought or two, and you have a good idea of the current dilemma ranchers are facing: sell out and move to town, or keep trying to make money with an outdated business model.

Enter the Criollo: with its feed efficiency, fertility, and self-reliance, ranchers can expect very little out-of-pocket expenses with raising Criollos instead of typical beef breeds. These hardy little cows will hustle a living in even the most hostile brushy environments and overgrazed pastures. They require little, if any, supplemental 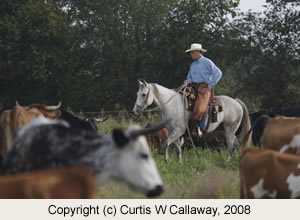 feeding. They're easy on the land, tending to improve a pasture, rather than destroy it. Their fertility is unmatched: dystocia is unheard of in Criollos, and 100% calf crops are common. In addition, the rancher needs fewer bulls; stocking 1 Criollo bull per 50-75 cows, instead of 1 beef bull per 25 cows. Pinkeye, foot rot, and other common problems are equally unusual in Criollos.

Although they are smaller in size than the European breeds, Criollos typically finish out at 850-900 lbs. A typical 850 lb Criollo steer will yield a hot carcass weight of 500 lbs, so yield rates are exemplary. Since a Criollo rancher will reliably wean more calves at significantly less expense, his Criollo calf crop will net a higher profit than a European breed calf crop.

For ranchers needing a bull for their first-calf heifers, Criollos are the perfect choice. Average birth weight for Criollos is 25-45 lbs; the F1 cross calves sired by Criollo bulls from European beef breed first-calf heifers will be small enough to be delivered easily, with little stress to the dam.

Another bonus from using Criollo bulls is that you don't need very many of them: a mature Criollo will routinely cover 75 cows in a 90-day breeding season, with 95%+ conception rates. Even yearling Criollos can cover 25-50 cows their first season!

The average beef cattle herd in the United States is approximately 30 head. Obviously the majority of cattle owners do NOT make their primary living from their cattle. However, these small holdings represent a large proportion of the US beef herd. These small-scale ranchers face a real dilemma: they want to protect their land from overgrazing, but can't afford the out-of-pocket feeding expenses associated with keeping typical beef cattle up while resting the land. They also can't afford the whipsaw effect of selling off their entire small herd each fall and buying new animals in the spring. This is where the Criollo can really help: with their natural self-rotation and utilization of all available vegetation, they'll actually increase the carrying capacity of their available land with little or no expense to their owners. So, the criollo owner has the best of all worlds:

A study done by the USDA concluded the following:

"The breeds we examined differed in their use of the landscapes we studied. Criollo cows tended to be generalists spending more time exploring the landscape, traveling longer distances, and spending less time near water. In addition to other possible adaptations, the smaller body size of criollo cows lowers forage demand, which may partially explain the shorter time devoted to grazing when compared to the larger British breeds. Criollo cattle demonstrated behavior characteristics that may improve profitability while having more favorable environmental impacts than British breeds. It is noteworthy that our study was conducted during a year of average to above average rainfall and forage production following an extended drought. While differences were found during our study we believe the magnitude of these differences may be greater during periods of drought, a condition that typifies these sites. Based on this work we believe there maybe benefits to using criollo cattle that are worth exploring further."

Click here to see the published results of this study.

HOW CRIOLLO BENEFIT THE BEEF INDUSTRY

The business model for the beef industry throughout the 20th Century has been European beef breed calves born & raised on a ranch, put on winter wheat or other supplemental feed at weaning until around 700 lbs body weight, finished out at 1,000 lbs+ on grain at the feed yard, then off to the packer. Standardization of packing plants dictated that the ideal animal for this business model was one who would finish at 1,000 lbs+, with a 16-oz ribeye, heavy back fat and heavy marbling. What's wrong with this picture?

Sharply rising costs on fuel and supplemental feeds are relentlessly squeezing out any profit for ranchers, stocker calf operations, and feed yards. The packers now have an animal the correct hot carcass weight for their packing plants, but they are trimming 100 lbs+ in excess fat, so their yields are way down.

Meanwhile, consumers want a leaner product, a smaller product, and one raised without antibiotics and hormones.

What's the beef industry to do?

European beef breed animals do not have the hardiness, disease resistance, and hustle to raise themselves, so the rancher's out-of-pocket expenses will continue to climb, as will the stocker calf operator's. European beef breed animals, with their inherent lack of feed efficiency, have great difficulty finishing out on grain before 30 months without the use of antibiotics and growth-stimulant hormones; the feed yard operator loses his profit without their use, but loses his consumer market with their use. The packer is losing money with the poor yields due to the excess back fat and internal fat, and not satisfying the consumer's wants.

Enter the Criollo. Needing very little help from man, Criollos have been raising themselves for centuries, on what most people would consider wastelands. With their fertility and longevity, they lower the rancher's out of pocket expenses to bare minimums. With their efficient foraging, Criollo feeder 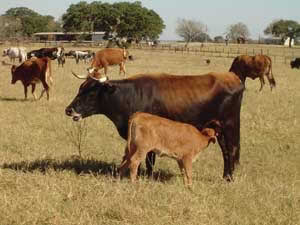 calves gain well, whether on wheat or brush. They'll finish out nicely, with terrific feed efficiency, at the feed yard. The packer will love the excellent yields--Criollo usually yield a 500 lb hot carcass weight from an 850 lb steer.

Many fans of the traditional beef breeds point out, with total accuracy, that their cattle are bigger and heavier, and therefore bring more money at the sale barn or the packer, than Criollos. That is completely true. However, the name of the game in the cattle business is the bottom line. European beef breeds generate more income, but also generate much more expense and require more time & effort. Criollos generate less income, but generate minimal expense and require minimal time & effort . Average additional profitability for Criollos over beef breeds, from 2006 data, is approximately $178/head. What's your time and effort worth?

Pressure from environmental groups and government to reduce the cattle industry's environmental footprint is not going to go away. The cattle industry needs to re-vamp their business model from a "going green" point of view. The Criollo is the ideal "green" cow--it thrives without antibiotics/growth hormones/etc., it doesn't need expensive feed supplements raised & delivered with extensive use of fossil fuels, it is able to improve any environment it lives in, and it provides a naturally lean, tender and healthful protein source for consumers.