How Would You Like Your Steak Cooked? The Different Types of Steak Cooking Levels, Explained

Do you know the true difference behind the types of steak cooking levels? Here's a helpful guide!

There's nothing better than a well-cooked steak dinner to start off (or close) a great night. What a steak tastes like largely depends on the cut, the seasoning, and the sauces used to cook it. But it also has to do with how the steak is cooked.

Read on for a quick overview of the type of steak cooking levels.

How to Properly Cook a Steak

The level that steak is cooked to will change the flavor and texture of the meat. The different levels of "doneness" are usually an issue of time, not temperature. Remember that different cuts of steak and different thicknesses will lead to varied cooking times, and the guidelines below are only rough suggestions.

Keep in mind that the USDA recommends that all beef is cooked to an internal temperature of 145 degrees Fahrenheit for safe consumption, though studies have shown that eating steak cooked to lower temperatures is still safe. Steaks should always be cooked on high temperatures to sear the outside and trap the juices and flavor inside.

Steaks should almost always be cooked on a grill or in a pan on high heat: all cooking guidelines below are for one-inch thick steaks. Rest your steak for five minutes under aluminum foil before eating. This lets the juices within the meat be reabsorbed, leading to a tastier cut of beef.

Steak that is cooked to be blue is the least cooked level that you can reach. Blue steak is seared on the outside, usually for only a few seconds to a minute, and then served. The interior is almost completely red and raw.

Blue steaks may be tough to chew, and won't have the same amount of juice as other levels of cooked steak. The interior of the steak is unlikely to be warm at all.

You'll want to sear each side of your steak for a minute on high heat, and let rest before serving.

Rare steaks are cooked so that they are still bloody on the inside. It's a step past blue, and the inner edges should be light brown, fading to pink with a deep red center. The middle of a rare steak is likely to be just barely warm or still cool.

For a one-inch-thick steak, cook the steak in a pan for three minutes on one side and two on the other, resting the steak for five minutes or so before serving.

If you were to ask a professional chef how they would want their steak to be cooked, nine times out of ten they would tell you medium-rare is the way to go. Medium rare steaks are red only in the very middle of the steak. The rest should be various shades of pink, with the outer edges browned.

Cook steak to medium-rare on high heat for four minutes on one side and then three on the other.

A medium steak is the best choice for people with different tastes who want to share a steak. Medium steaks will usually have a little bit of charring on the top and bottom, but not so much as to dominate the taste of the entire cut of beef. It should have no red or cool parts within it, with a small to medium-sized pink and warm center.

Cooking a steak to medium doneness can be done on high heat with five minutes on one side, four minutes on the other.

A medium well-done steak won't have any red in it. There may be the slightest of a pink tinge at the very middle of your steak, but that should be it. Medium well steaks will have charring on either side, due to the longer cooking time, though the middle of the steak will necessarily be a little softer.

Cook your steak for six minutes on each side to get it to medium-well.

A well-done steak is a steak that is seared on the outside and then broiled or cooked so that the entirety of the steak is brown. This provides a crispy outside texture and a consistent cooked texture throughout, while still locking in the juices and flavor. Well done steaks are a little tougher to chew than steaks cooked to other levels.

Well done steaks are the only level of doneness that you don't have to do at a high temperature. Cooking at a lower temperature over a longer period of time can prevent burning and ensures that the steak's flavor is not compromised. Cook a well-done steak at medium or medium-high temperature instead.

While you can sear a well-done steak for seven to eight minutes each side, it may be better to broil it instead. Put the steak on a baking rack about six inches away from the heating element, and broil it for eight minutes on each side.

While most people will tell you their opinion, the fact is that there is no single correct type of steak cooking level. While the "industry-standard" would be medium rare, when you're ordering your meal you're only ordering for yourself. Don't worry about what other people would say or recommend and order what you know you'll enjoy.

For more information about grilling meat, check out the recipe section of our website! We can walk you through some of our favorite dishes so that you can impress your family and guests throughout the year!

The Science of Salting Steak

Salt has been used in culinary pursuits essentially since the dawn of man, though its use was much less glamorous then than it is now. The first recorded use of salt goes back to China around 2700 B.C. Salt back then was mostly used as a preservative.

People in civilizations around the globe learned that by packing perishable foods with salt, they would last much longer than thought possible. This allowed fisherman to bring fish in from the coasts or travel long distances in trade.

Today, salt is used in cooking (especially with meat) to do two things: tenderize and boost flavor.

Salt tenderizes a hunk of meat, or the stalk of fibrous vegetables, in the same way it preserves them. Adding salt to the exterior of a piece of steak draws out the moisture in the steak. The salt then dissolves in this moisture, creating a brine that is then re-absorbed back into the steak.

In this process, the lean muscle proteins in the meat are broken down, made juicier and more tender. All thanks to salt!

Of course, tenderizing meat with salt and making it juicier will increase its flavor, but salt makes things taste better for reasons that have nothing to do with the food itself. Salt also a complementary relationship with our tongues.

Saltiness is actually one of the five basic "flavors" our tongues can taste, along with bitterness, sweetness, sourness, and umami (or, the savoriness you get from something like gravy). What makes salt different from these other flavors is that they can overpower or complement them, "opening up" our taste buds.

Salt has been shown to reduce the bitterness of other foods, improving and altering their taste. For example, many people find dark chocolate too bitter to eat. But adding salt to a chocolate bar suppresses this bitterness and allows the other complex flavors of the chocolate to shine.

Adding salt to sweet or sour things won't necessarily reduce their flavors, but will balance them out, making the food less one dimensional.

Every steak worth its salt has to have a flavorful, crispy sear. And salt plays a pivotal role in allowing this to happen. To understand why, we first have to understand the Maillard Reaction.

The Maillard Reaction is what the chemical process that leads to the burning, or "browning" of food. This process unlocks new flavors and textures in our food. This is why a seared steak is much more flavorful than a steak that is simply boiled.

For the Maillard Reaction to occur, you need two things: heat (a lot of it) and dryness. Salt aids in the latter part by, as we mentioned, drawing moisture out of the steak. Though much of the moisture is reabsorbed, the exterior portion of the steak remains drier than it was before.

This moisture elimination allows the steak to brown faster when introduced to a smoking hot skillet, reducing the chance of overcooking it.

How (and When) to Salt a Steak

So now that we know why we should salt a steak, we'll explain how and when to do the salting. As for the how, the process is very simple. All you have to do is toss salt on every side of the steak, about a tablespoon for each side. Then, you just leave the steak uncovered on a counter or in the refrigerator.

But the folks over at the Food Lab have figured out the best thing to do is salt your meat a full 24 hours before cooking. This allows your the salt to do its briny magic on your prime cut of meat.

The logic here is that 40 minutes gives your meat the time to reabsorb its liquid and any amount of time before that just makes your steak wetter. But salting it right before putting it in the pan will aid in forming a solid crust on the steak.

To sum things up for you, salt tenderizes meat, adds flavor thanks to various chemical processes. To get the most out of your salt, you should consider salting steak a full 24 hours before cooking.

We hope, with this information in tow, you'll be able to cook a juicy, perfectly seared steak for your next date night or family gathering. Of course, salting steak is only half the battle.

You still need good quality meat. If you're unhappy with your grocery store's offerings, you should check out our steak offerings. 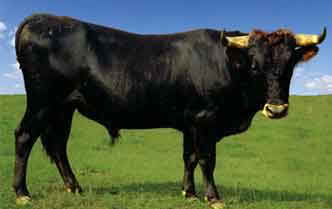 "... I was blown away by the taste and texture of the beef. It's been years since I've tasted range beef. ...."
Warren S., Anchorage, Alaska
"...I cannot tell you how pleased and impressed I am and thank you so much for bringing your product to market...."
J. Kelly M., Houston, Texas
"Criollo beef is moist and flavorful to the max-it redefines my attitude towards red meat in my diet!..."
Susan H., McKinney, Texas
"This is what Beef is supposed to taste like!..."
Tim M., Dallas, Texas
"We used the Texas Criollo Brand Ground Steak in our spaghetti sauce last night and my husband and children could not get enough of it..."
Nicole P., Flower Mound, Texas
"...Criollo beef is superior to any other beef we have had. But, the incredible taste of Criollo beef is something that defies adequate description! It really has to be tried to be described! Count on us as repeat customers!"
Mike and Pamm A., Nolan, Texas
"The tenderness and taste of this beef is well worth the effort to try it!..."
Robert A.
prev
next